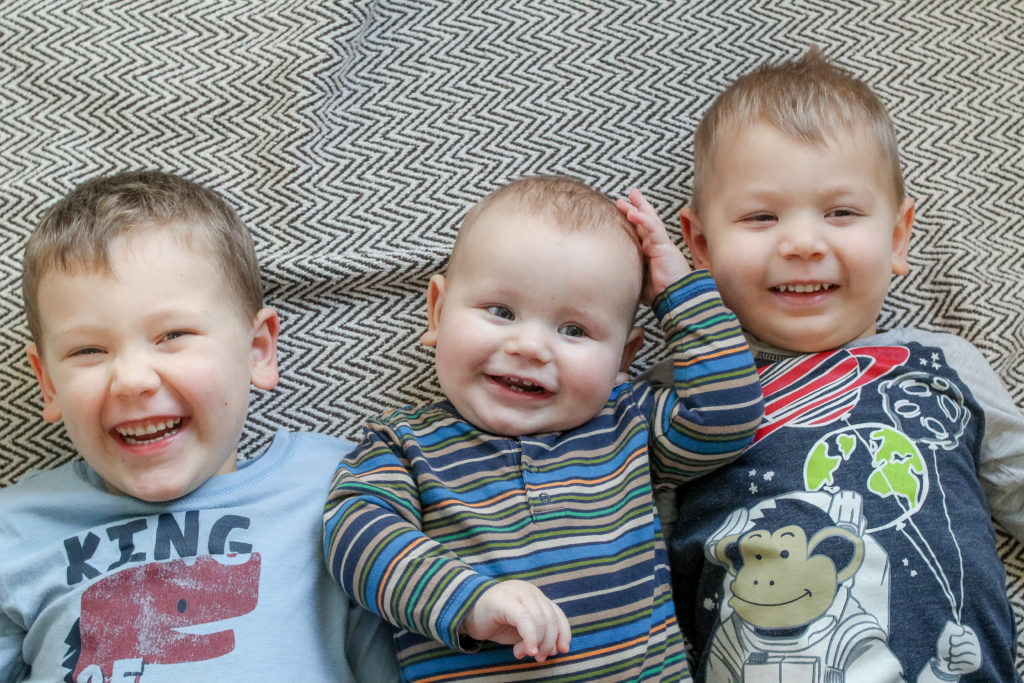 Eight Months at a Glance {Daniel} 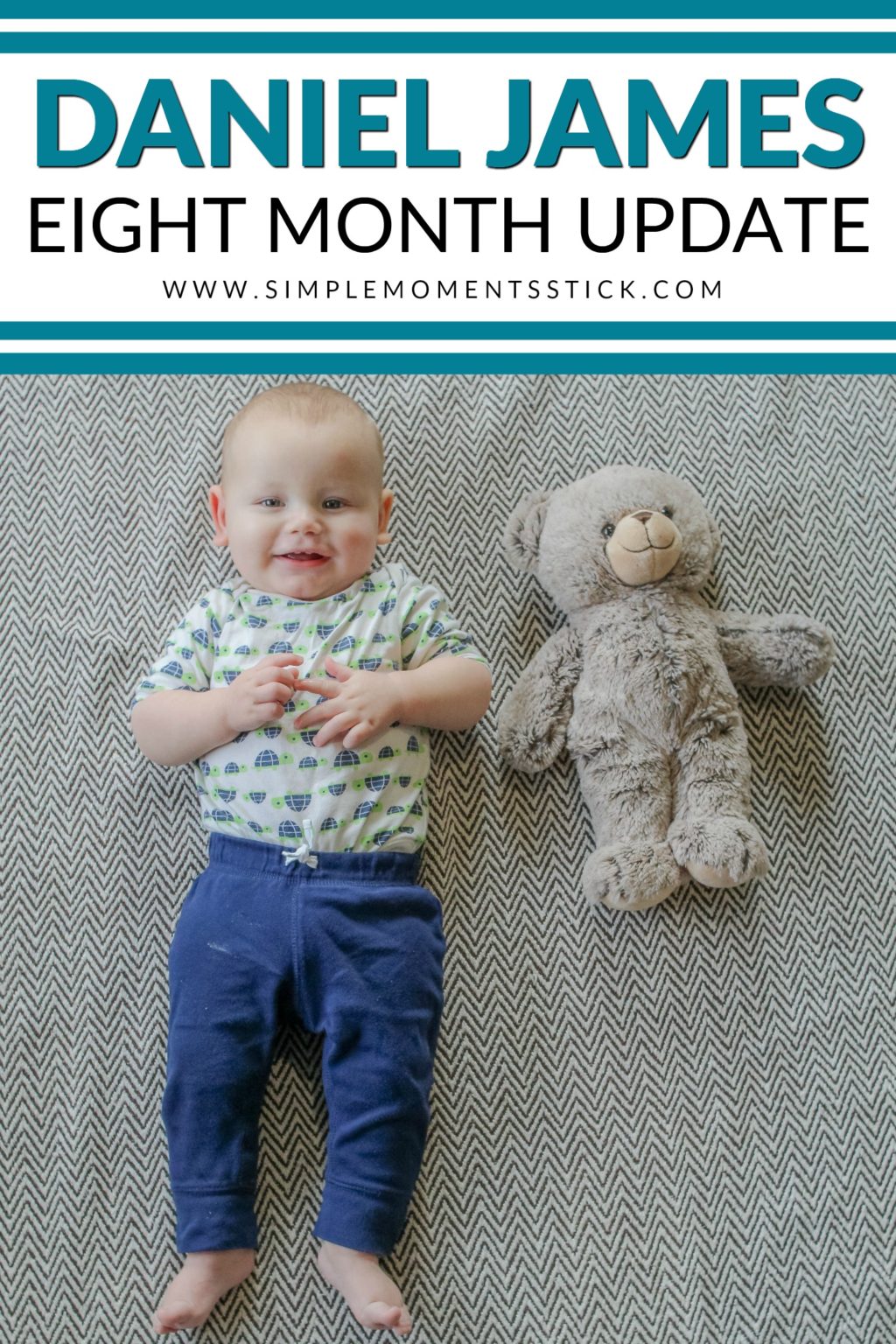 People are starting to ask me all the time if Daniel is wanting to crawl and all I can do is laugh and say that of course he is not.  He’s my little lazy baby.  Remember how I told you all last month that we finally have a roller?  Well, we still have a roller – but only from his back to his stomach.  He’ll roll onto his stomach, play there for a while, and then start yelling because he wants to be picked up.  He’s fully capable of rolling from his stomach to his back.  He just chooses not to.

Basically Daniel would be content to just sit up all day every day.  He loves sitting there, playing with a toy or two, and watching what’s going on around him.  I have to say that I don’t mind it too much since it means I don’t have to totally worry about legos and other little toys getting into his mouth.  I just plop him out of reach of the legos and we all get on with our days.  He’s in the beginning stages of figuring out how to get down from sitting without falling.

Since Daniel is a pro at sitting up, we have started letting him take baths with his big brothers.  He LOVES it!  Daniel just giggles and splashes away as his brothers do everything they can to make him laugh.  It’s precious seeing their relationships blossom and watching them truly interact with one another.

Daniel cut two more teeth this month so his total is up to six.  He’s working on two more and I’m sure they’ll come in any day now.  So far teething hasn’t been too bad for the little man and I’m praying it stays that way.

Like every good little Kellogg, Daniel LOVES to eat!  We’re doing baby led weaning again and my little man is here for it!  He chows down on anything that’s put in front of him and I’m pretty sure I have yet to find something he won’t eat.  The first bite of anything always gets a goofy, scrunchy faced reaction from the little guy and then he realizes he likes it and devours it!

Although we mostly do baby led weaning, we also give Daniel purees every so often and he’s finally figured out how to eat it without spitting half of it out.  #Winning

I’m also happy to say that Daniel is a pro at drinking from a bottle (as long as it’s pumped milk, of course).  All the effort we put into teaching him to drink from a bottle was worth it because now I can go out and about for hours at a time and I don’t have to worry about whether or not my little man is eating!

Have I mentioned that Daniel is crazy friendly and loves everyone…  except Josiah.  Yep.  He still is SUPER anti Josiah and Jojo is clueless.  Jojo just wants to come cuddle his baby and if he gets close Danny begins screaming.  But Josiah comes at him and showers him with love anyway.  It’s basically the funniest thing and I can’t wait to tell them about it when they’re older.  And yes, it’s only Josiah…  He loves Caleb and it’s not like Caleb is any gentler with him than Jojo is!

Daniel has started reaching for people (mainly me) when he wants them.  He absolutely has his preferences but will be ok with second best (or third best…) when necessary.  He’s fine with being left with people – like in the church nursery – and I’m here for it!

We have a few other babies in our small group and Daniel is starting to notice and attempt to engage with them.  This stage of learning about other people is one of my favorites and it’s so fun to experience it again.

Ok, well, sleep time is turning my baby into a monster (more on that later) but, other than that, he’s still a little sweetie so I guess I’ll take it.

The growling that Daniel was doing last month has pretty much stopped but he’s started with all sorts of other noises.  He chatters, blows raspberries, and smiles a ton.  Danny doesn’t really laugh much but gives an amused smile to things he thinks is funny.

This month it has felt like Daniel has started understanding more.  He definitely recognizes his name and loves when people talk to him.

Poor buddy got a cold this month (along with his big brothers) and was pretty miserable for a little over a week.  Thankfully that’s gone now and life is back to being good again.

This month also has brought the beginning of the transition from three to two naps.  I also forgot that this was a super hard transition (at least for my boys).  It feels like he never gets enough sleep if he takes two naps but if he takes three naps he sleeps horribly at night.  We ARE going to sleep again!  If I say it enough I’ll start believing it, right?

Since sleep is so hard and he’s hardly rolling over I stopped attempting to unswaddle him.  I know it needs to happen in the near future but one thing at a time, right?

And since we’re talking about the horribleness of sleep – for the first time ever I have to sit in the back of the car with a child on long car rides.  Good thing we have a minivan!  Both Caleb and Josiah are amazing car sleepers but Daniel can’t fall or stay asleep in the car.  He just screams and screams if I’m not sitting there holding his binky in his mouth and patting him.  Problem child status for sure! 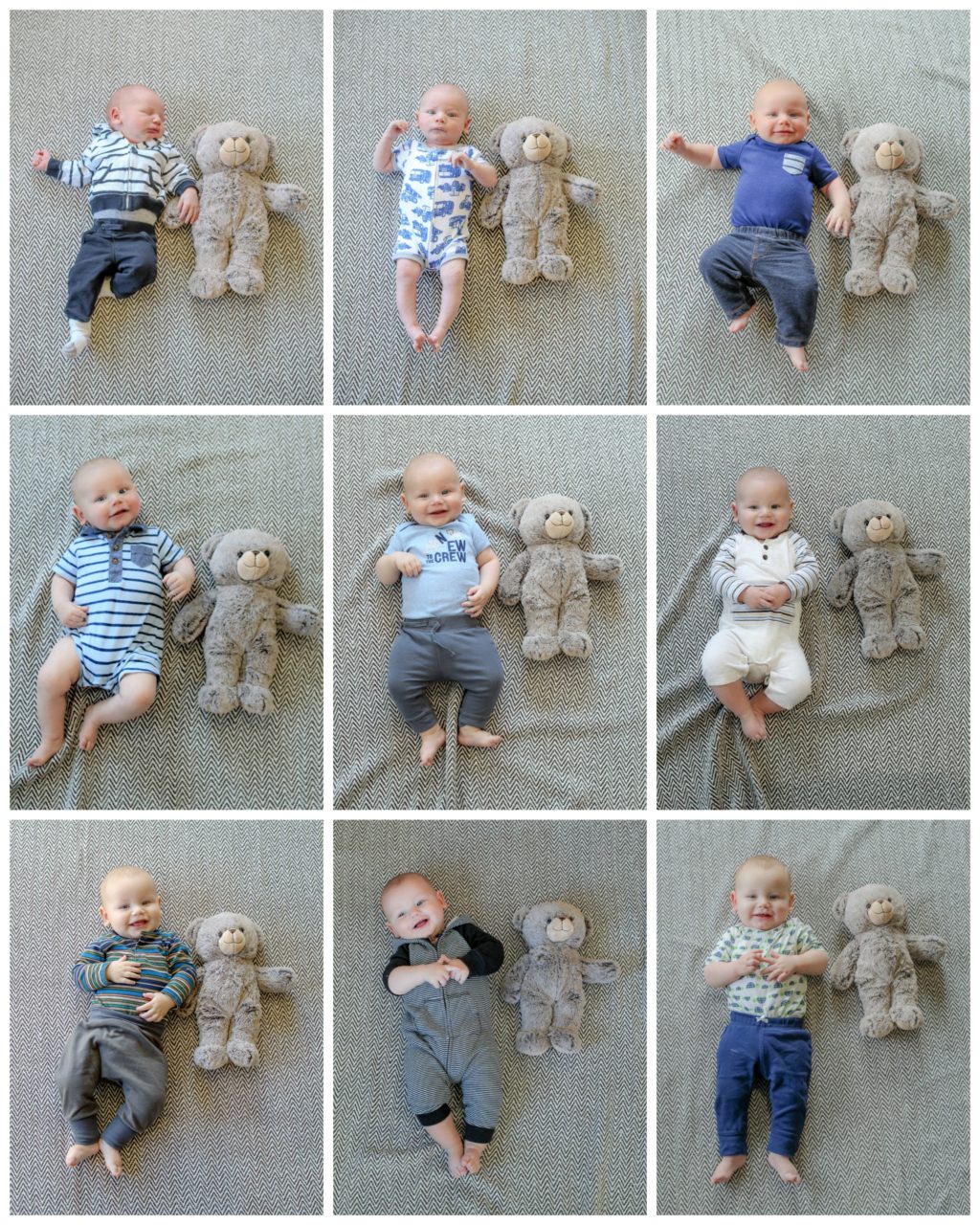