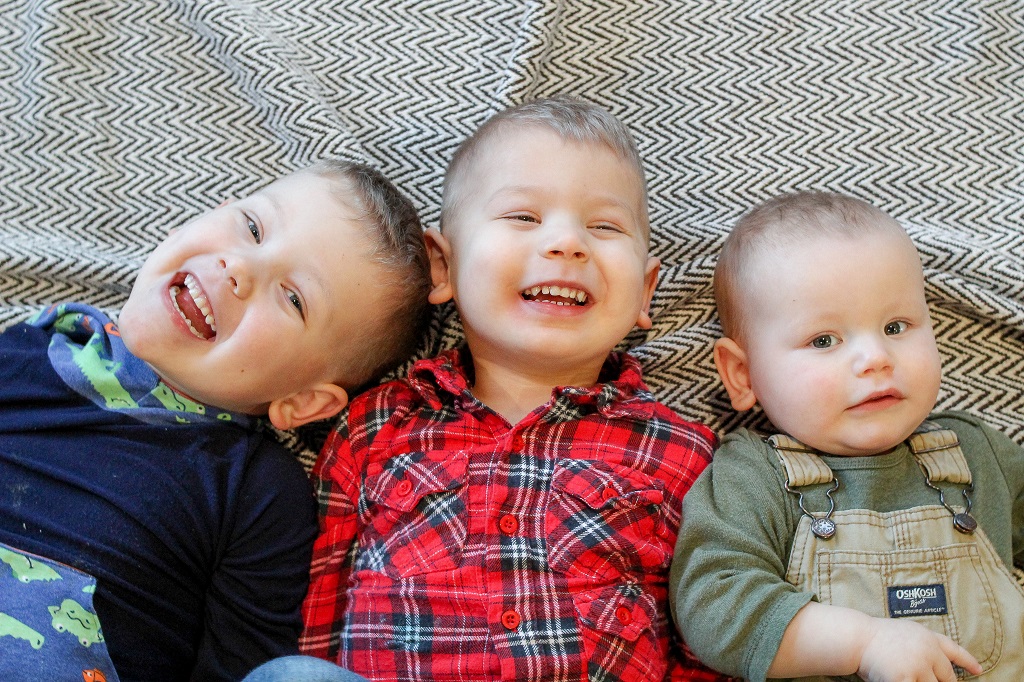 Nine Months at a Glance {Daniel} 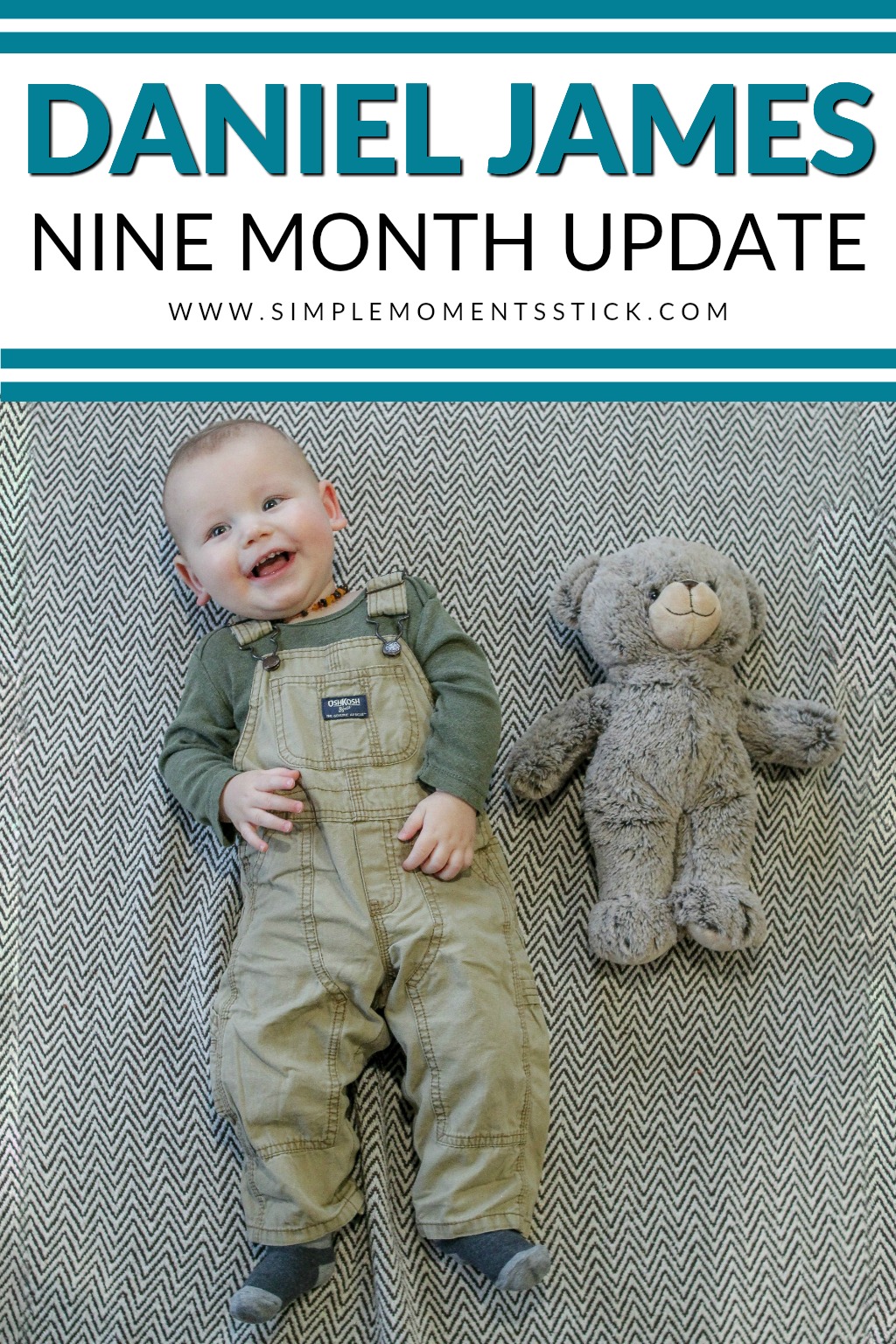 Listen, people, my little man is finally thinking about moving!  Thinking about moving is a big deal for him, ok?  He pulls himself up onto all fours and wiggles around a bit.  That may mean nothing to you but for my lazy dude who didn’t roll until seven months that’s huge!  Maybe we’ll have a crawler by next month!  Time will tell…

Danny still wants to just sit around most of the time and then, when he decides he’s done, is able to slowly let himself down onto his stomach.  It’s a nice change from his falling bonking himself every time he wanted to be done sitting.  He’s pretty awesome.  😉

My favorite thing this month is that Daniel has really begun dancing.  It’s the cutest thing to see his face light up when music comes on as he begins bouncing away to the beat.  He’s typically in the church nursery on Sundays but his sleep schedule was off one week so I kept him with me and during the last song he woke up and began dancing.  No one around us could focus on anything other than the cute baby bouncing away.  I certainly love my musical family!

Two more teeth have popped through this month and he’s been working on his canine teeth for a while.  I’m hoping they come in soon because he’s kinda a grouch when they’re hurting him.

Baby led weaning is still going super well.  We have yet to find a food that Daniel won’t eat.  He’s still a good little Kellogg.

Nursing is still going fantastically and he’s still doing amazing taking a bottle of pumped milk when he needs to.  He even drank a whole bottle from a babysitter after I was back home!  I was so proud of him!

Daniel loves people.  It’s amazing to me how fine he is with anyone and everyone holding him.  We’ve been able to leave him with a few different babysitters and he’s been perfectly fine with them.  He definitely still loves me most, Caleb second, and Nate third.  Josiah’s probably his 239823th favorite person but we’re working on it.

Danny loves giving kisses but is very particular about who he gives kisses to.  He’ll smother me in kisses, gives a few to Caleb and sometimes will give kisses to Nate.  If Nate and I are both near him and Nate asks for a kiss Daniel will smile, lean over to me, and give me a kiss.  The one time he actually did give Nate and kiss when I was there he then leaned over to me to give me one too.

My little man is still mostly happy but sleep is still causing a lot of issues.  We’ve found some solutions (more on that later) but I’m hoping and praying that we figure out his sleep so I get my happy boy back soon!

Although Danny isn’t the giggliest of babies we’ve found that he loves being tickled and will giggle away when it happens.  He’ll then pull the person’s hand back onto his belly to get them to do it again and again and again!

Welp, apparently nine month olds are supposed to know how to wave…  Daniel doesn’t wave.  There’s a pattern forming here where he does his own thing and doesn’t care what he’s supposed to be doing at any age.  I have to say, it’s making me love my boys’ pediatrician more and more because she is never worried about his lack of being able to do a skill because she actually pays attention to HIM and sees that HE is healthy, physically able to do things, and perfectly intelligent.  She’s been right that he’ll do all the things in his own time.

Even though he’s not waving, Daniel loves making noise.  He babbles all the time and loves when one of us copies him.  We’ll basically have full on conversations of baby talk.

We’re back to having nothing to report this month and I’m good with that!

After realizing that Daniel sleeps wonderfully if we still swaddle him I decided we would do just keep him in his swaddle for now.  We knew we needed to begin sleep training but decided a slower process of teaching him to fall asleep while swaddled before getting back into unswaddling him would be best.

Sleep training is going pretty well.  It’s crazy how different it is with him than it was with Caleb and Josiah.  The two of them were fully sleep trained within a week and Daniel still has a long way to go.  He’s at the point now where he can fall asleep by himself if he is swaddled and has his pacifier.  He also falls asleep best if either Nate or I are sitting in the rocking chair next to his bed but, thankfully, he only needs that if he’s super over tired.

Through the next month we’re going to be working on getting him sleep trained while unswaddled and I came up with a great plan of action with his pediatrician (love her!) at his nine month appointment.  I’m feeling good about it and hoping solid sleep is in all of our futures. 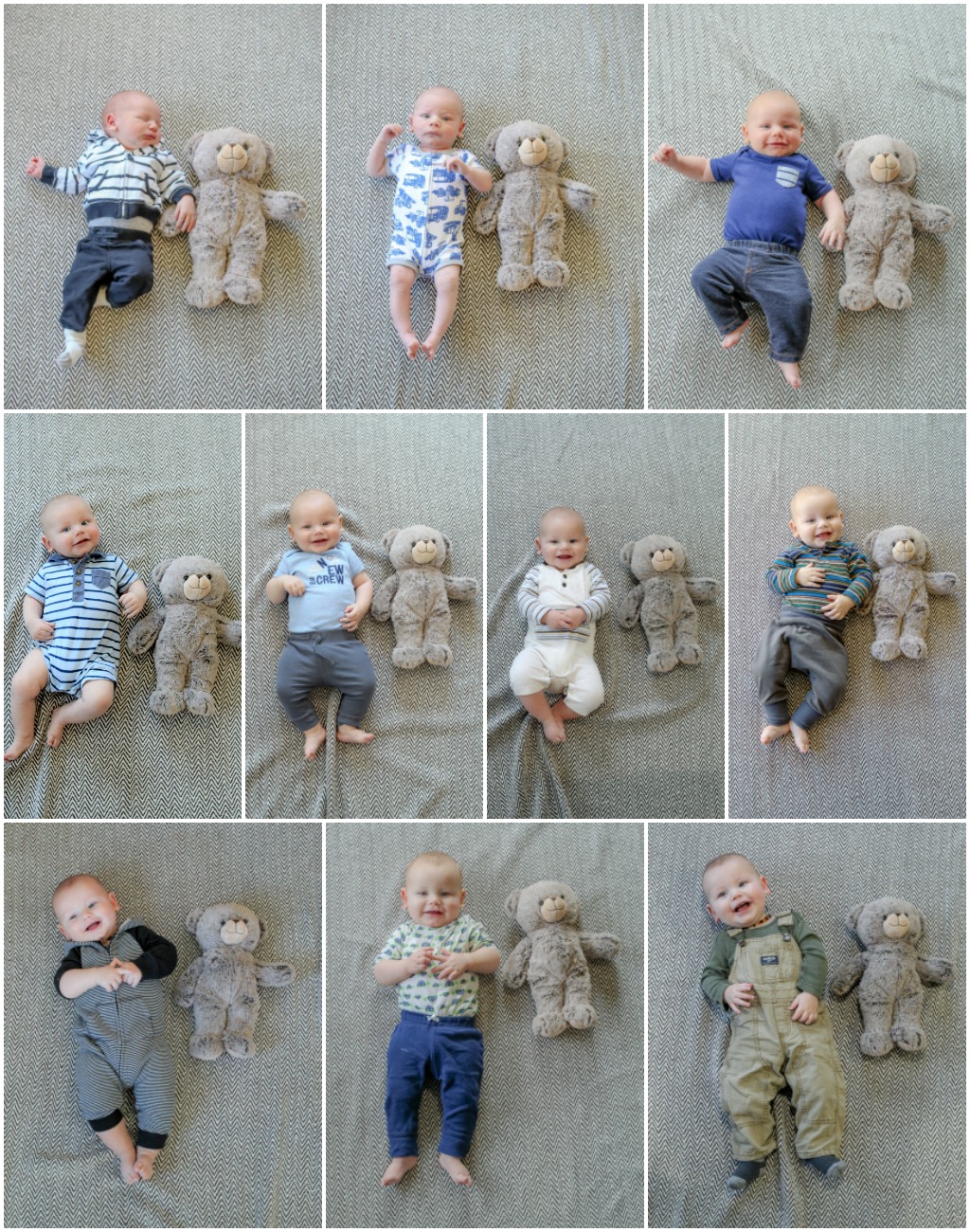