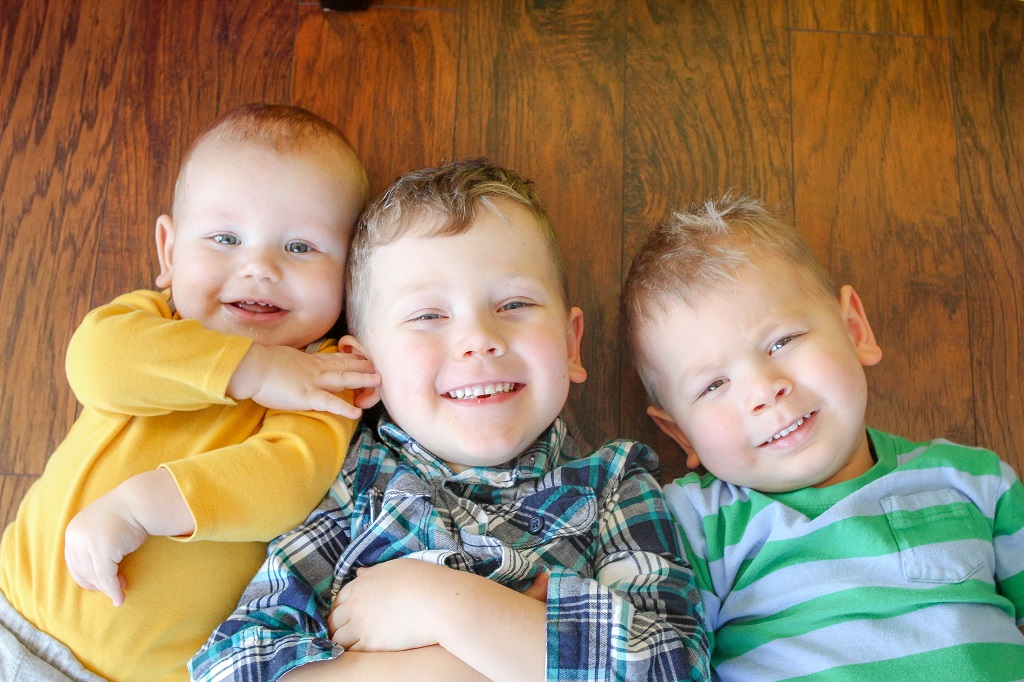 Ten Months at a Glance {Daniel} 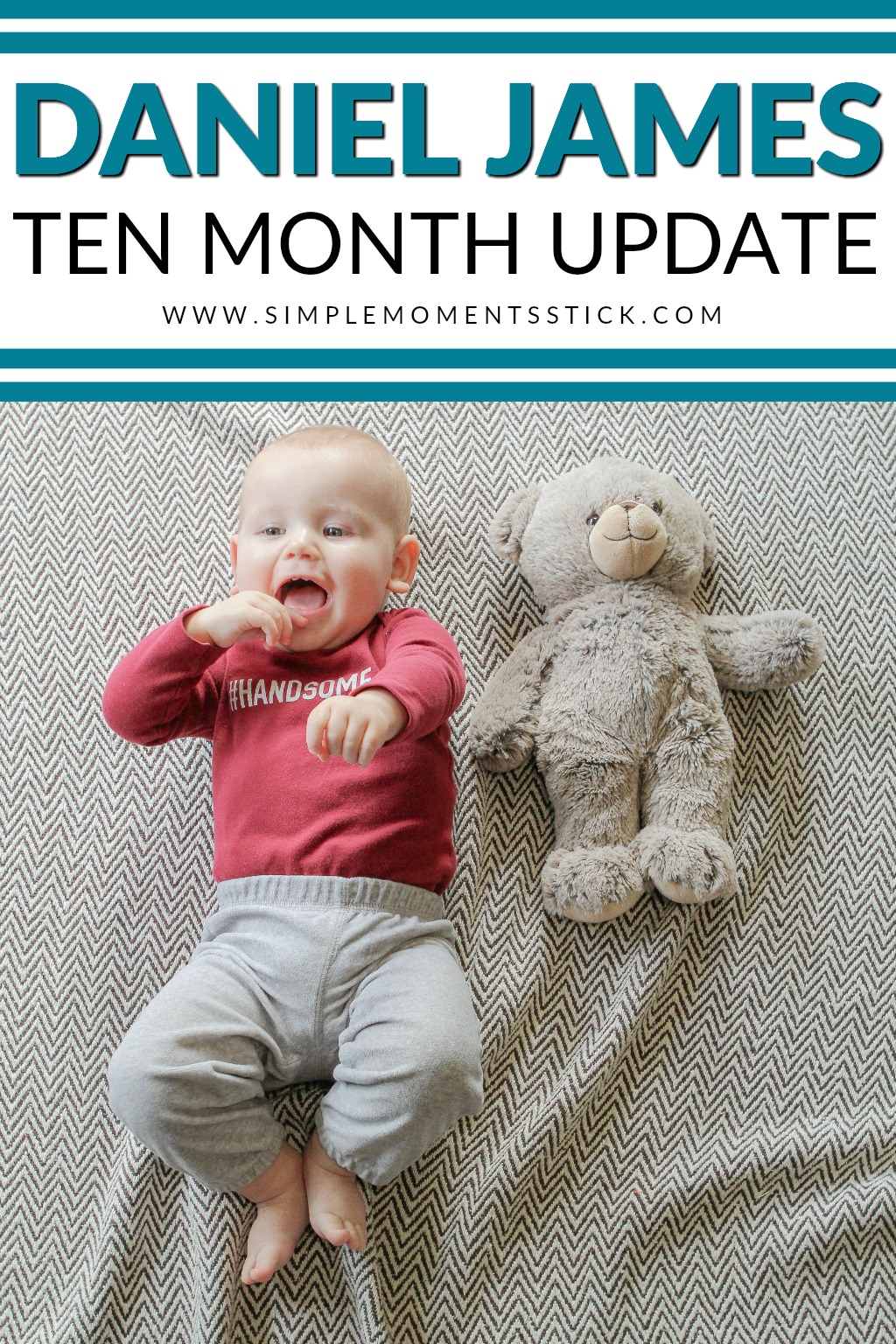 This month has been full of changes in the Kellogg household…  Mostly that means we’ve got a mover so we’re having to teach the big boys how to not leave their little toys all over the floor.  Legos are THE WORST with an army man scooting baby!!!  It’s been so fun to see Daniel learn that getting from point A to point B is totally possible and he’s become a FAST little booger.

Toward the end of the month Daniel began pulling himself up onto his hands and knees and truly crawling.  He is much faster doing it army man style so he’ll typically give up and go back to that.  I’m definitely washing more laundry now that his shirts are dragging across my floor.  I should just attach mop pads to his onesie and let him do my work for me.  😉

We’ve given up on giving Daniel any sort of pureed baby food because little man is ALL ABOUT shoveling normal people food into his mouth.  Baby led weaning is the best and I love that he’s all about it too!  It helps that I don’t have to think about bringing him food while we’re out and about or travelling.  Nursing and real people food is all the little kiddo needs.

The cutest thing now is that Daniel gets so frustrated if he sees one of us eating and we don’t give him some.  He whines and looks at us with puppy dog eyes and, let’s be honest, he usually gets a bite of whatever it is we’re munching on.  Third child perks!

Daniel is still all about people.  He happily smiles at and goes to pretty much anyone but absolutely loves his family best!  Even better than that, though, is that he’s actually starting to tolerate Josiah.  Jojo is probably Daniel’s 146th favorite person now.  He’s moving up in the world!  Someday Daniel will actually love his toddler big brother…  Maybe…  😉

Daniel joined Nate and me on a trip to Colorado at the end of the month and little dude was a CHAMP!  He did fantastically both plane rides – getting a tiny bit fussy before needing a nap but nothing a pacifier didn’t take care of.  Everyone in the seats around us loved him and thought he was the cutest.  (I mean, he is, so…)

Now that we’re getting sleep issues figured out, Daniel is back to being my smiley, happy, content little kiddo.  I’m so thankful God gave me a laid back third baby like him because his big brothers are basically crazy people.  Adorable crazy people who I love very much, but still.

Another month has gone by and still no waving from Danny boy.  Caleb and Josiah are in a competition to see who gets him to wave first and it’s pretty much the cutest thing.  They sure adore their baby.

Daniel is all about blabbering away in his cute little baby voice.  He’s making more and more sounds and loves when we mimic him.  He’s trying to start mimicking us but hasn’t quite figured it out.  One of his common noises is “buh-buh-buh” and Caleb is convinced he’s saying Bubbu – our nickname for him.  So, if Caleb ever tells you that Daniel can say his name, just smile and nod.  😉

We were on such a good no injury or illness streak and that’s gone now.  Early this month Daniel came down with Hand, Foot, and Mouth Disease.  He handled it like a champ and basically didn’t act as if anything was wrong but the rest of us suffered since I couldn’t take him (and therefore, couldn’t take the big boys) anywhere.

HFM was a blessing in disguise, though, because the son of the friends we were visiting in Colorado ended up having HFM while we were there.  The boys were sharing toys, chewing on the same items, and basically swapping as many germs as possible.  Since most kids get HFM only once we weren’t too worried about Daniel getting sick again!

Like I said last month, we ended up reswaddling our crazy nine month old so we could all sleep again.  He was obviously capable of rolling but we made sure he never even tried doing that while swaddled and knew he was safe.

At his nine month appointment I talked to his amazing pediatrician about all this and she said keeping him swaddled was fine as we worked toward unswaddling.  He needed to learn how to put himself back to sleep without hitting himself in the face and waking himself up.  She suggested we started with naptimes until it was successful and go from there.

That’s exactly what we did.  We unswaddled him for naps and, for a while, he would only sleep about 30-45 minutes each nap.  He only takes two naps no matter what so he was overly exhausted all the stinking time.  We still swaddled him at nighttime in order for him to get a full nights sleep and gradually his naps began getting longer and deeper.

When we went to Colorado I definitely allowed him to regress.  Since he was only going to be getting one good nap a day because we were out and about so much we decided to swaddle him back up for his nap and for night AND I rocked him to sleep for all his sleep times.  I was not looking forward to breaking him of those habits for a second time once we got home but we did what we needed to do to have a happy baby on our trip. 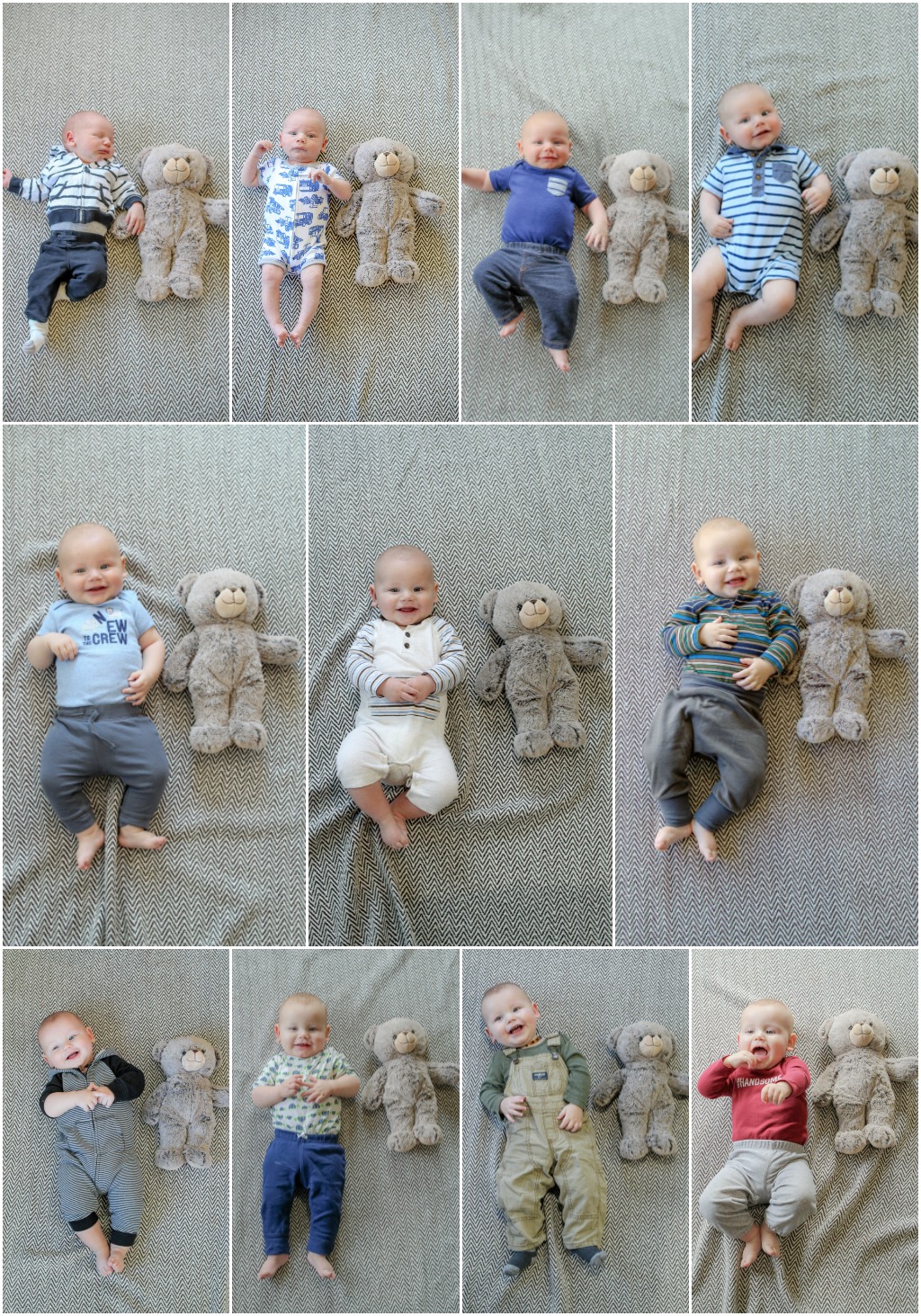